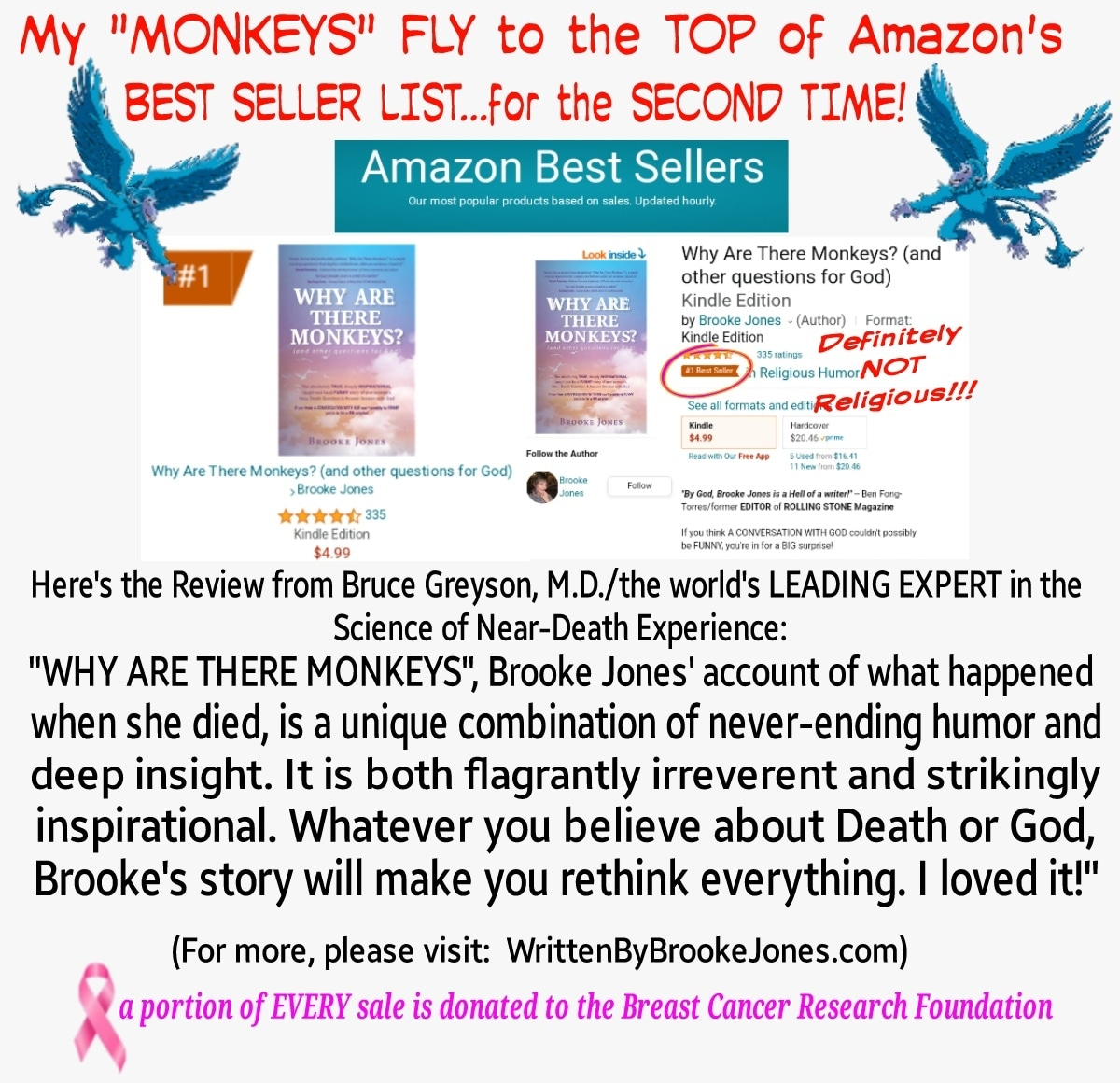 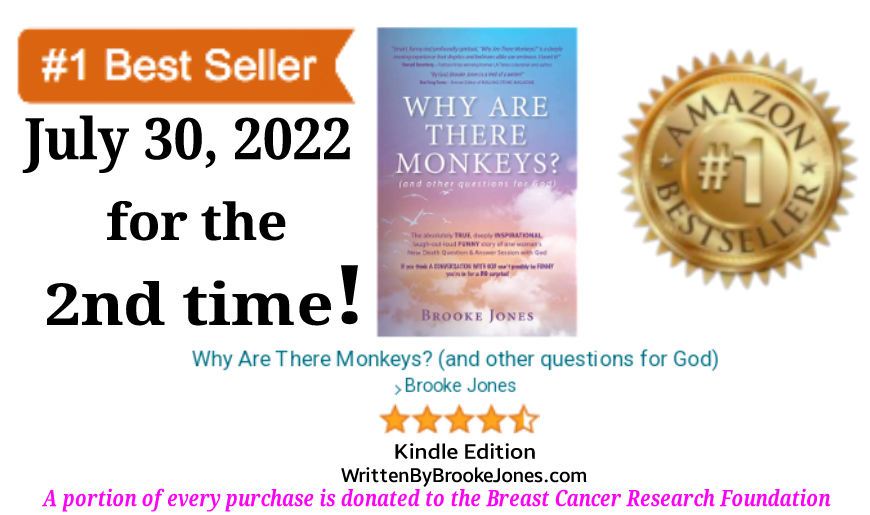 What people are saying about “Why Are There Monkeys? (and other questions for God)”

“WHY ARE THERE MONKEYS?”, Brooke Jones’s account of what happened when she died, is a unique combination of never-ending humor and deep insight. It is both flagrantly irreverent and strikingly inspirational. No matter what you believe about death or about God, Brooke’s story will make you rethink everything. I loved it!”

With whip-smart wit and a breezy frankness, Jones (Breast Cancer Warrior) opens this appealing account of briefly dying in 1975 and engaging in (what she perceived to be) a colloquy with God with a succession of quotable laugh lines. “I had never heard of ‘Near Death Experiences,” she writes, after brisking readers through the basics of her childhood, college experience, and religious beliefs. “For me, born and raised in and around New York City, bright lights and tunnels were nothing more than the basic ingredients of traffic jams.” Jones, in her 20s, overdosed and was briefly, clinically dead; after a comic introduction, the book recounts her memories of what she felt, saw, and discussed before she came back. “It’s amazing what a dead girl can do in eight minutes,” she notes, before offering a series of comic conversations with a booming, disembodied Voice—a God who, she’s relieved to learn, has a sense of humor.

That Voice asks Jones the most imponderable of questions: “What would you like to know?” The book’s title offers a hint about the nature of the ensuing discussion, and as Jones and this God engage in patter-comedy routines, readers open to playful considerations of spirituality will find both pleasure and insight in the back and forth. This God offhandedly reconciles Darwin and the Biblical story of Creation, tosses out provocative possibilities (“Who said the Garden of Eden was on Earth?”), confirms the existence of a devil (“one of My very best creations”), and toasts the 1969 Mets as an exemplar of miracles.

“Making God laugh is a trip,” Jones notes, and that casually irreverent tone characterizes a work that’s both funny yet serious. Readers may wonder at first whether this is a fictional prank, but it’s soon clear that a spirit of conviction powers her story, even as that story’s told by a gifted entertainer who can’t resist punching it up. She’ll make you laugh, too.

An inherently fascinating, humor laden, insightfully entertaining, thoughtful and thought-provoking read from cover to cover. Simply stated, “Why Are There Monkeys? (and other questions for God)” by Brooke Jones is one of those books that will linger in the mind and memory long after it has been finished and set back upon the shelf.  Unreservedly recommended.

Smart, funny and profoundly spiritual, “Why Are There Monkeys?” is a deeply moving experience that skeptics and believers alike can embrace. I loved it!

“Why Are There Monkeys?” is delightful, insightful, spiritual and startlingly funny! I loved every minute of it! It left me (an atheist) more of a believer than I was before, with a renewed zest for life and less fear of our uncertain future.

I’m dead. I’m standing at God’s front door, and I’m talking to God! I would have dropped dead out of pure shock, but inasmuch as I’m already dead, it occurs to me that would be redundant.”

From the initial disclaimer to the end of the book, this is an extremely funny book that examines life’s vulgarities while focusing on a near-death experience (NDE) the author had as a young woman. She considered herself, as a non-practicing Jew, to be a “Closet Agnostic.” When she died for eight minutes, she experienced a feeling of floating, going through a tunnel with white light, and having a very interesting and confusing conversation with God after doing a few too many ‘shrooms and heroin.

She finds God to be funny. She describes the experience as a “cosmic irony.” Asking both inane and profound questions of God, she is fascinated—and perhaps a bit horrified—by God’s answers, for who knew that God is a hermaphrodite and that the human race may have come from extraterrestrials?

This is a hysterically witty, irreverent, sarcastic book regarding an NDE, an event most people wouldn’t find so entertaining. They might find it fascinating, scary, mystical, spiritual, or religious but not a romp via an overdose. The author explores topics such as God’s race, gender, beliefs regarding evolution and creation, evil, why she got the mumps, why she didn’t get a pony when praying for one, whether PMS is spiritual, and various other questions. This short book is actually quite profound, and this depth is found within the conversations with God. Only a special writer could craft such a story. Although the book is sure to offend both believers and non-believers alike, it may also lead some to think deeply about their beliefs. It is not to be missed.

RECOMMENDED by the US Review

The US Review of Books

Why Are There Monkeys? (and other questions for God) by Brooke Jones is simply a brilliant book. Brooke Jones has interwoven the wisdom of life into her story of having a conversation with God while she was at Heaven’s front door after she died. Being knowledgeable on many topics, Brooke asked God many questions, including those on fate, responsibility, faith, choice, and prayer. To bring the subject into focus, at the beginning of each chapter, Brooke writes a mini-introduction to the topic covered in that chapter. Brooke has also successfully used light-hearted comical narration to present deep and serious questions about life. I couldn’t stop laughing when I read the amusing exchanges between Brooke and God.

If we had a chance to meet God, what questions would we ask? Would they be “What does God look like?”, “Why is there so much evil in the world?” and “What is the purpose of life?” In Why Are There Monkeys?, Brooke has asked all these questions on our behalf and many more. In fact, there are also lengthy discussions on Darwin’s Theory of Evolution, the creation story of Adam and Eve, and the Bible. The answers from God are revelations. I was absolutely absorbed by the chapter “Is That Your Final Question?” Indeed, what was the final question Brooke Jones asked God? This book is well written and an easy read – I finished it in one sitting. Yes, Why Are There Monkeys? is a highly recommended read which is both entertaining and educational.

By God, Brooke Jones is a hell of a writer! 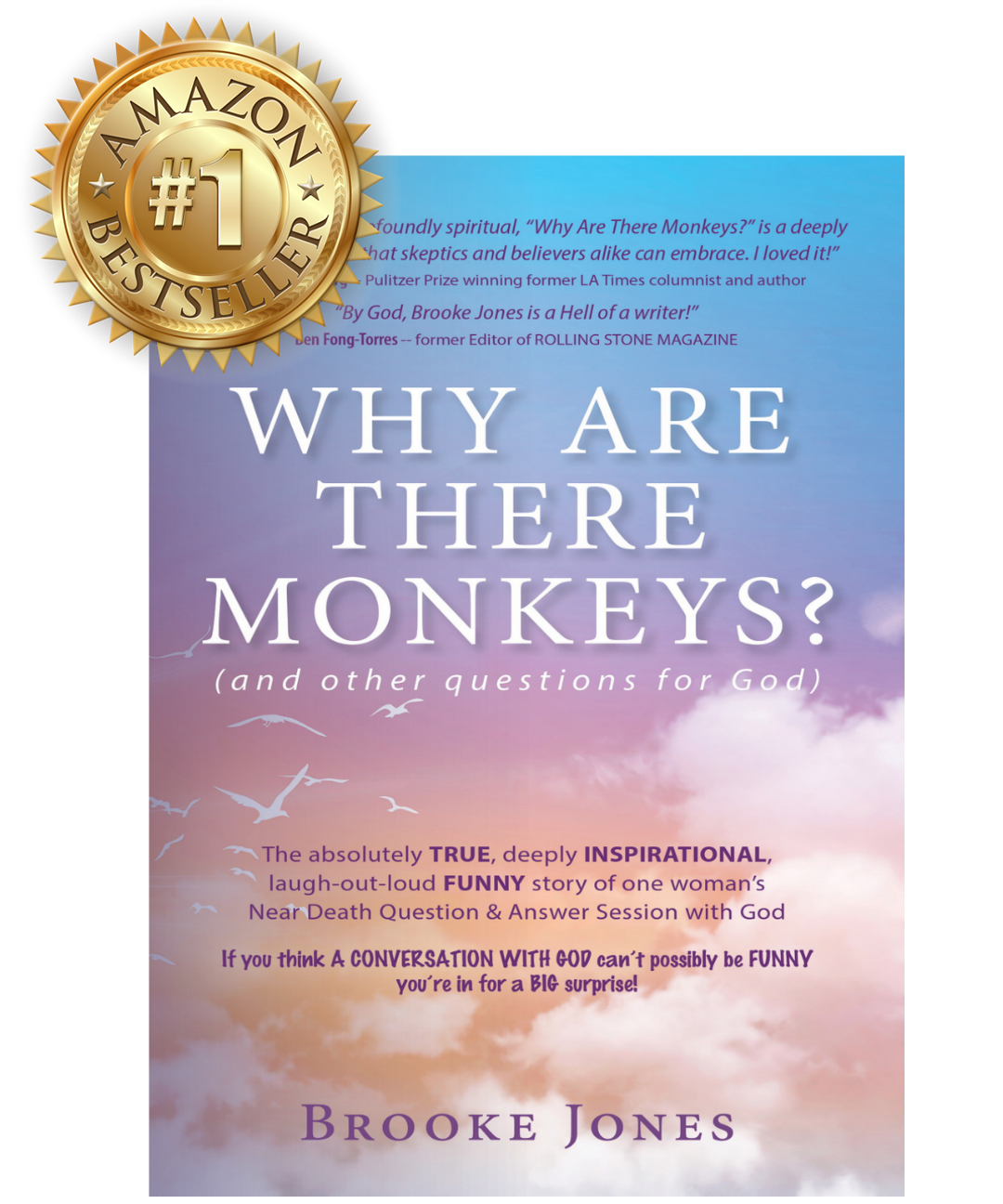 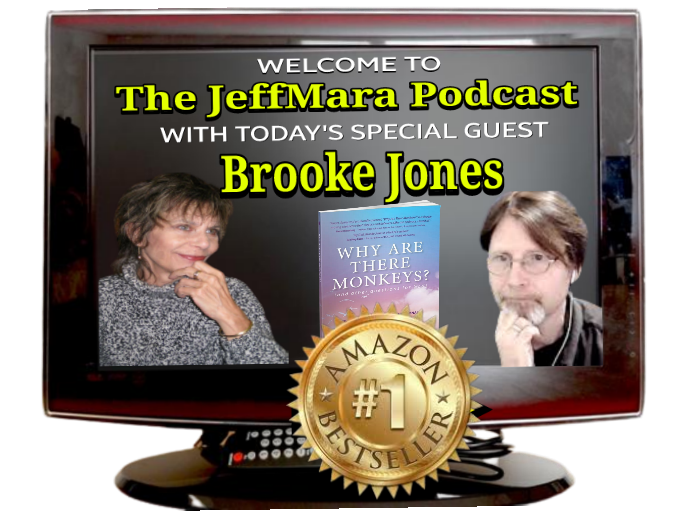 Tell us a little about yourself. Where were you raised? Where do you live now?
Born and raised in and around Manhattan, author, Los Angeles and San Francisco Radio Personality and Political Satirist, Brooke Jones, never liked cold, wet, snowy weather so, at the age of 18, she left New York and moved to…Chicago, where she quickly discovered that NY’s version of cold, wet, snowy weather was downright tropical when compared to what life along the banks of Lake Michigan had to offer in December, or January, or February! (and if that sentence were any longer, it would be on Death Row!)

In the early Summer of 1973, while Richard Nixon and his BFFs were being publicly autopsied for all the world to see (“Must Watch TV”, to be sure!), Ms. Jones went about as far west as the continental US would allow, settling in San Francisco…and a good time was had by all!…until…she died! You can read all about it in her Memoir “WHY ARE THERE MONKEYS? (and other questions for God)”.

After returning to the “Land Of The Living”, Jones migrated south to Los Angeles, where she continued the Radio career she had begun in SF, and started her career as a Political Satirist. Her morning radio show, “Brooke Jones & The Morning Muse” — “Political Satire For The Deeply Twisted” — became a hit! Newspapers wrote about her. Columnists quoted here. Johnny Carson invited her to be a guest of The Tonight Show! (and that’s a story unto itself…but it will have to be told at another time).

After a long and thoroughly annoying battle with Breast Cancer — a battle that cost Jones what she shamelessly refers to as her “Bodacious TaTa’s” (had you known them, you would have called them that yourself!) — she is now Cancer-free (boobless, but Cancer-free).

These days, Jones resides in the Hinterlands of the Pacific Northwest, along with a menagerie of lovely creatures of both the 2-legged and 4-legged persuasion. When she isn’t working on her next book, she’s designing deeply twisted cards for her company, “CardBard Greetings” (available online at THE CARD OUTLET — zazzle.com/thecardoutlet); writing articles for her Blog, “What If?” (whatif.blog); or creating Memes for Camp Meme-A-Day (Facebook.com/@CampMemeaDay), she’s giving interviews about her bizarre Near-Death Experience and the Memoir it inspired, “WHY ARE THERE MONKEYS? (and other questions for God)”.

If you’re interested in learning more about Brooke Jones, the self-proclaimed “Gypsy Crone Queen of Snarklandia”, you’re invited to visit her website, www.WrittenByBrookeJones.com where you’ll find a short video (“HerStory”) about her career in radio; a brief Video/Audio sample of her book; her book’s Trailer, and a few other amusing items. If what you find there doesn’t cause you to run SCREAMING into the night, the author invites you to contact her, via the Contact Form on her website.

Jones donates a portion of EVERY sale (of her CardBard Greeting Cards and her Memoir) to The Breast Cancer Research Foundation.

At what age did you realize your fascination with books? When did you start writing?
I began reading at the tender of age 3, and my writing career began shortly thereafter.

During the first week of 5th grade, my class was given an assignment: Choose one author and read everything that author ever wrote. In the final weeks of 5th grade, we received one more assignment: Rewrite the Nursery Rhyme of your choice in the style of the author you chose to read at the beginning of the school year.

I was, what — 10 years old? — and I had chosen to spend 5th grade reading everything ever written by…Edgar Allen Poe. (yes, I was a strange child!) So…I chose to rewrite “Hickory, Dickory, Dock”, in the style of Edgar Allen Poe’s “The Fall Of The House Of Usher”! Okay, yes, I was a very strange child, but I’m not, anymore! No, I’m not, for I am now a very strange adult!

Who are your favorite authors to read? What is your favorite genre to read. Who Inspires you in your writings?
When I’m not writing, I am a voracious reader. While undergoing Chemotherapy, (for 18 months! Yikes!) I read a minimum of 3 books a week. (Hey, when going through the kind of Chemo they put me through, my daily activities were rather limited — I was either sticking my head in the toilet or in a book. I much preferred the book!)

While I prefer Biographies, History or Historical Novels, I love authors who use language in a way that makes me jealous of their skills, or who can tell a story in a way that makes me unable to stop reading it. You want a few examples? Okay, here are a few: Mark Twain, Sir Terry Pratchett, Steven Paul Levia, Tom Robbins, Ray Bradbury, Terrence Newman and Roland Merullo.

Tell us a little about your latest book?
“WHY ARE THERE MONKEYS? (and other questions for God)” is the absolutely TRUE, profoundly INSPIRATIONAL, laugh-out-loud FUNNY story of my Near-Death Question and Answer Session with God — and I know it really happened because I was given PROOF that no one could deny! If you think a conversation with God couldn’t possibly be FUNNY, you’re in for a BIG surprise!

The feedback from readers has been AMAZING, and the reviews have been great (the author said, humbly). Here’s just one example: The U.S. Review of Books called it: “HYSTERICALLY WITTY…NOT TO BE MISSED!” (and who am I to disagree?)

The Card Outlet
What If? The Blog
Camp Meme-A-Day
News, Reviews & Interviews